NOTICE: This site is under reconstruction. Come back later for details. Maybe Sunday. I'll try to have it up by then.

Until then, you can visit us on Discord, where I try to update more frequently.

9/26/2021 - Cappro wasn't keen on keeping everything Warriors-related. I also managed to talk with one of my playtesters over the weekend. To abridge what I was discussing with them, I don't like the Warriors fandom, and trying to make a game that will rely on being shared among people I don't like is not going to work out in the future. My playtester had some ideas for differing factions for what I repitched the game as, and Cappro pointed out that I could start exploring mechanics that Warriors wouldn't allow us (such as archer characters with a "range" attack) (he didn't seem to want to actively help on this new game besides spitballing some ideas).

That means, ultimately, that this Warrior Cats TCG project is probably going to be shut down. At the end of November, I'm going to cancel the hosting for this site and start removing the files from my computer.

UNTIL THEN, for anyone reading who might stumble upon this in the meantime who has interest in this game, the materials are going to be available on Discord (this includes frames, deck lists for four clans, and the fonts at request). I'll hand off the material and help design here-and-there, but won't head the project. If not and nobody's interested, well... then that's that.

To wrap things up, here's a sample of what the final template was going to showcase with a sample Bluestar card, just to say "at least we got it off the ground." 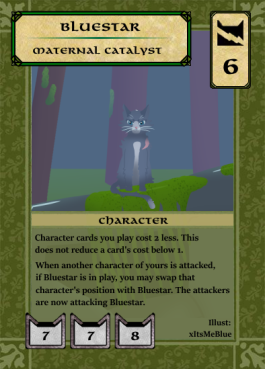 9/21/2021 - Management is either changing, or the site is shutting down. This isn't going to be a pleasant read.

For months now, after watching both groovemaster's Discord server and mine stagnant, I've wondered if interest in creating a Warriors card game was primarily just a novelty from the boredom of the 2020 lockdowns (beyond a few sparse attempts throughout the years). It's been a constant problem in the back of my mind, and the main reason I've been so slow to actively work on this site/game. To test this, I posted this project's predecessor, a custom Magic set called "Silverpelt" to r/custommagic and r/warriorcats to gauge interest (the card updates themselves were getting around 30 upvotes, max). The reaction was honestly a little soul-crushing. 10 upvotes on r/warriorcats, 6 on r/custommagic. Meanwhile a post a short time afterwards of a pic featuring a "Warrior Cats DND AU" got a couple hundred and a few awards. I'm not going to spout any jealous bullshit or say I deserve that attention. Rather, seeing the difference pointed out that there wasn't an unawareness of tabletop culture in the Warriors fandom, but that the overlap between the two is superficial. To actually word that like a fucking human, "it pointed out that nobody gives a shit."

I'm not entirely surprised by the disinterest. My initial goal for growing the project had been to foster some niche aspect of the fandom that wanted to explore the worldbuilding of the series a little more, or have something to "give back" to a series that I grew up with (or rather, other fans who I thought were similar-minded). I was getting excited about the idea of designing a game. To be quite frank, I really have no idea what the future of this project is. This fandom is shit; it's full of kids that usually grow out of the series after a few years (and stay gone because the fandom gives them zero reason to stay) and mentally-unstable pedophiles that cry every single "-ism" at you when you disagree with whatever retarded 'progressive' tangent they shit out of their ass (I would apologize for my tone here, but I know I'm not the only one tired of walking on eggshells when talking about these hypocrites), and any hopes I have of finding or cultivating some subsect of this community makes no logistical sense. Hypothetically, if I'm making a community and game from scratch, there is ZERO reason to put an upper bound on this by making it a Warriors fangame, when any effort I could make in growing a game could be spent elsewhere without needing to appease a community that I don't find value in while also NOT limiting what I can do to Warriors.

Having your time and efforts wasted is not a good feeling, but the answer to this is not to double down and dig my heels. Realistically, this project has three outcomes: it stays on current course with someone who doesn't like the fanbase and dies, I scrap everything and close this site down while taking what I have and make it a different card game, or I hand the lead to somebody else and sit back from the shadows.

This brings us to the actual update. Some of you on the Discord server might see someone called Capproccino. He's someone I know irl whose been helping me set up this site. I have not approached him yet, but if he accepts, then he'll be taking over this project after I finish the text-fitting for the card maker (I don't want to leave him with something completely broken). I'll be regulated to managing the site, and offering a few designs (since I still find "brewing" fun). If he does not, or he doesn't answer by next Friday, I'm going to cancel the hosting for this site or replace it with a notice saying it's been discontinued, let the Discord stagnant, and take what I have and make a non-Warriors game out of it. I know it's not fair to be public about this before consulting with Capproccino, but honestly nobody gives a shit, and I don't want to just abruptly cut it off with nothing else.

9/9/2021 - The new frames are done. I have them on the Discord server as pdn (Paint.NET) files. The next major phase of the project is to get off my butt and make a simple javascript card-maker. I found some libraries to help with that, but I suck at web dev (self-evident here lol), so that might take a hot minute. That's going to explain the lack of images for now, since we don't have the cards made with little more than some test frames.